Kudos to Unison, seizing on Valentine's Day to keep up pressure on the Government over Andrew Lansley's controversial NHS changes.

The union put on a picture stunt earlier on, with 'David Cameron' and 'Nick Clegg' holding a broken heart. 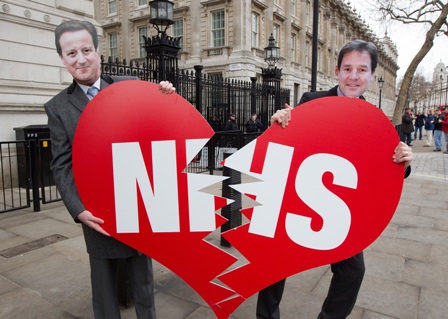 Unison's "heartfelt" plea was "not to break our hearts by breaking our NHS".

But with the Commons in recess, senior Coalition figures may be wondering if the love has dropped out of their relationship.

Not only was Lib-Dem deputy leader Simon Hughes calling for Lansley's head on Sunday, but the welfare reforms are back in the Lords and expected to suffer fresh defeats (ping pong has started). Also in the mix are Budget discussions, with the Chancellor preparing his set piece for next month.

On that note, James Forsyth had a great titbit in the Mail on Sunday - the Quad of Cameron, Osborne, Clegg and Cameron were due to have a meeting tonight after unexpectedly finding their diaries clear. But there was an obvious reason, and once wives found out some quick rescheduling took place.