Tories give Warsi both barrels

By all accounts, last night's 1922 Committee meeting was a bruising experience for Baroness Warsi.

The Standard has been told that MP after MP lined up to attack her handling of MEP Roger Helmer's recent defection to Ukip - with one onlooker describing it as a "roasting".

The noble lady has never been popular among certain sections of the party, but this appeared to come from much wider than just the "usual suspects".

So savage was the mauling, and so badly-received was her response, that colleagues' mobile phones buzzed all night with reports from those present.

It sparked instant calls for her to be sacked as soon as possible and replaced with an MP - with Housing Minister Grant Shapps' name in the frame.

The Standard has been told among those who spoke out against Warsi's handling of the Helmer affair were Chris Heaton-Harris, Brian Binley, Sir Peter Tapsell, Nicky Morgan and Philip Hollobone.

Here's a flavour from some people inside the room.

One onlooker said: âShe had a very very tough time. She got it with both barrels from MPs across the party.

Another said: âShe got a roasting, even from loyalists. I thought she was appalling. She has got no idea.

âI just thought she was out of her depth. I have never seen anything like it - other than the last time she was before the 1922. I genuinely think she is the worst chairman we have ever had."

And a third added: âIt was from her perspective a car crash. There was a barrage of criticism.

âIf had been an experienced Member of Parliament it would never have happened. This young lady thinks she knows everything and is the best thing to emerge in Parliament but she is not.â

To put it mildly: ouch.

Not everyone feels the same though. One MP said it did "nothing for morale" when colleagues attacked the party chairman, while a Conservative spokesman said Baroness Warsi had acted âentirely correctly and properlyâ over the Helmer situation.

They added: âThe rules are perfectly clear. At the time Roger had not resigned, therefore there was no vacancy. Before there was a vacancy we could not select a candidate.â

We can reveal that David Cameron's confernce will open under the slogan .... drum roll ....

"Leadership For A Better Future."

It's a phrase that acknowledges tough times but contains that classic Cameron optimism, pointing to a rturn of the good times if people stick with a tough leader.

In today's Standard there's a lively interview with the charming Tory chairman Sayeeda Warsi, who reveals the slogan and explains why leadership is the prime focus of the conference - and why families will "instinctively" swallow the tough medicine prescribed by Dr Cameron.

"It would be so easy for us to get the [governmentâs] chequebook out and not make the tough calls. But ask people if they would prefer to have it easy now or, by taking tough decisions, create a better future for their children, most will instinctively choose to put their children first.â

Warsi is on her usual bubbly form. Shge reveals that she, Cameron and other ministers will be recroding audiobooks for blind chuildren during the conference (it's their latest social action project and us Press boys are invited to do the same).

The first considered Tory attack on Ed Miliband's speech is also there. She says Labour created the something-for-nothing society and asks how Ed's speech squares with Labour's opposition to removing legal aid from cheeky squatters.

But my favourite line is a cracking joke about when Chris Huhne compared to the evil Dr Geobbels. âWhen I was young my mum wanted me to be a doctor and I never lived up to her expectations [Warsi became a lawyer]. What I always say is, the Conservatives might have made me a Lady - but it took the Liberal Democrats to make me a doctor.â

Borat and the Baroness 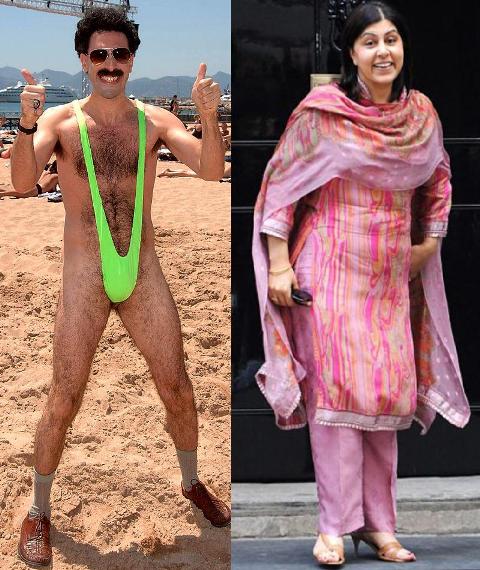 This summer, minister without portfolio Baroness Warsi will visit Kazakhstan on one of a number of bridge-building trips with the Islamic world.

She will address the foreign ministers' meeting of the Organisation of the Islamic Conference in the Kazakh capital Astana - a move being hailed as a major coup for Britain.

Will she be offering "Borat diplomacy" - Cultural Learnings of America UK for Make Benefit Glorious Nation of Kazakhstan? Probably not, but I couldn't resist.

Incidentally, it is the latest in a series of trips the Baroness has made to Muslim countries that have taken place largely under the radar.

She is seen as the perfect minister to wield "soft power" - Pakistani heritage, speaks Urdu and understands other languages, and a female in places where women are often strangers to politics.

As one aide said: âShe will often step off the plane wearing a salwar kameez (tunic and trousers) and her hosts do not expect that - itâs a far cry from âtraditionalâ British diplomacy and helps to facilitate things."