Why the Boris V George contest is hotting up

Set aside the scrap between Boris and Ken.  Because if our poll is right, MPs will soon be buzzing about Boris v George.

The big stories over recent weeks have been a gaffe-free (so far) campaign by a maverick but distinctly Tory candidate for London Mayor, and the shipwreck of George Osborneâs third Budget, which seemed almost anti-Conservative to some MPs, with its attack on wealthy philanthropists, grannies and Cornish pasties.

Unluckily, for the Chancellor, his most damaging decisions have all coincided with Borisâs rising stock.  If there is a Johnson victory on May 3, nothing will stop Tory MPs gossiping about a topic that usually kept back for the silly season: Who will take over as Conservative leader when David Cameron stands down in, say, 2017?

Our latest YouGov poll contains plenty of ammunition for the pro-Boris camp. He is seen by over a third as the candidate for the rich, yet stands a clear six points ahead of Ken Livingstone. Clearly, siding with wealth creators is not a bad electoral tactic. Note too the irony that Labour has been attacking Boris's Â£250k part-time earnings as a columnist in the belief that voters would be outraged. Far from it: Londoners at least seem relaxed about people who are filthy rich and stick up for other rich people.

Boris is 10 points more popular than the Conservatives are in London, even though Labour is gaining on the assembly, which suggests his brand has broader appeal than the more cautious Cameron/Osborne.  He's also miles ahead among women.

It would be hard for Johnson to stop speculation even if he wanted to - and there is little sign that he wants to. In the past year he has denounced the 50p rate, defended the City, attacked Ken Clarkeâs sentencing plans, called for a referendum on Europe and attacked housing benefit cuts as âethnic cleansingâ. Some of these positions were clearly designed for his City Hall battle - but others looked like markers with the Tory Right.

Ask Tory ministers who will succeed Cameron and most will instantly name Osborne. But take a straw poll of backbenchers, a more right wing group, and you find few certainties and a lot of anxiety about Conservative values and policies, plus real anger about the Budget.

If Boris Johnson wins he will be the most successful Conservative in Britain today, with a mandate from the biggest British electorate outside a general election. Cameron and Osborne have yet to win a general election outright. The case for Boris is that he looks like a winner.

A winter chill swept through the Entente Cordiale today as the row between Britain and France over economic reforms escalated.

With French president Nicolas Sarkozy vowing to go it alone and bring in a financial transaction tax, Boris Johnson launched a cross-Channel raid to lure French bankers to Britain.

âBienvenue a Londres," said the London Mayor, speaking to the Evening Standard.

"This is the global capital of finance.

âItâs on your doorstep and if your own president does not want the jobs, the opportunities and the economic growth that you generate, we do.â

The Prime Minister stressed that the European Union was warning that the tax could cost up to 500,000 jobs.

âIf France goes for a financial transactions tax, then the door will be open and we will be able to welcome many French banks to the United Kingdom,â he added at the end of an EU summit in Brussels.

Mr Cameron has branded as âmadnessâ the moves to introduce the âRobin Hood taxâ in Europe, but not in America and other financial centres.

They thought it was all over ... but now it looks like a photo-finish.

The second poll in a week has Ken Livingstone ahead in the mayoral battle, albeit by a teeny two points.

Although Boris HQ says it's a useful wake-up call for complacent supporters (see below) the numbers must have given the Mayor a sickly knot in his stomach. For the first time in four years, there is a serious possibility of having to hand back his crown to its previous owner.

For Livingstone it is a pleasing moment - proof that there is life in the old proâs left hook. But Ken is far too experienced to get over-excited about a two-point lead, a gap well within the margin of error.

Cool heads note that January has been Labourâs most intensive month of campaigning so far, with 1,000 activists shoving out leaflets against the New Year fares increases. If the fares issue fades, so might their lead.

The cold fact is that there is now a real battle on, and every vote counts. Turnout on May 3 will be absolutely critical with the polls this close - ultimately, the winner will be the man who gets his supporters off the sofa and into the voting booths.

âThank goodness it was not another eight point lead,â joked one of Mr Johnsonâs staff, meaning that some Boris backers have been lulled into a false sense of security. The danger is not imaginary - our poll finds that Londoners by more than two to one think that the Mayor will get a second term.

In terms of issues, Johnson is ahead on running the economy, representing London overseas and - by a big two-to-one margin - on squeezing the best deal out of his friends in central Government.

Fares are Livingstoneâs key issue, but the 38 per cent who are more likely to vote for him because of the New Year rises may just reflect Labourâs core vote. He is ahead (35 - 24) as the candidate who knows most about the concerns of âordinary Londonersâ, which reinforces research by YouGov that found Ken was seen as more âin touchâ.

More surprising, only 30 per cent dislike Johnson because of the Governmentâs spending cuts. Kenâs campaign to âTory-iseâ the Boris brand has yet to succeed.

Alas for Brian Paddick, he is not breaking through. The ex-policemen is even behind on fighting crime, and only two per cent trust him most on the economy.

But the fight is wide open between the frontrunners. May 3 looks set to be a cliffhanger.

Boris slips into the '22 while George is away

Pure coincidence, obviously. But as the Chancellor begins his tour of the Far East, ESP learns that Boris will be slipping into his manor while he is away.

The Mayor has been invited to address the mighty 1922 Committee that represents Conservative backbenchers on Wednesday. Any suggestion that Boris will be parading his qualities as a potential leader are wide of the mark, the Mayor's allies insist. Rather, he will be seeking their support for the May mayoral elections, both as door-knockers and artillery in Parliament.

However, it would do no harm to Johnson's profile with newer MPs if he delivers a joke-strewn tub-thumper. More so if he can be tempted to make a few digs at the Lib Dems and the French. The Chancellor's spies will be watching closely.

I don't know what the chances of these hitting the streets en-masse are, but it's an impressive piece of Boris Johnson fanaticism. 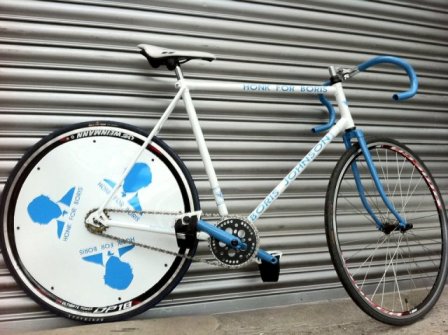 It's the brainchild of London Conservative Future deputy chairman Einy Shah, brought to life by Cole Coachworks in Barnet.

I'm not sure what the Ken Livingstone/Brian Paddick equivalents are, but I'd like to see them...