Rattling the cages on behalf of the reasonable folk on the Clapham omnibus...

Minicab boss: my plan to tackle 'holier than thou, gung-ho cyclists'

The boss of Britainâs biggest minicab firm today called for cyclists to undergo training and get insurance before being allowed to ride on Londonâs roads.

John Griffin, chairman of Addison Lee, said he wanted to end the âholier than thou, gung-hoâ culture of some cyclists that he blamed for an increase in deaths and serious injuries. 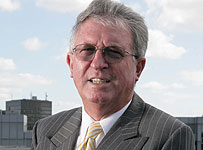 But he sparked immediate fury among cyclists who said that it was his taxi drivers who needed to be trained - something Mr Griffin says he has introduced for his 3,500 drivers to help them cope with âirresponsibleâ cyclists. There were calls on Twitter for a boycott of Addison Lee.

Mr Griffin said: âI think cyclists are not properly trained. The facts are that somebody who has never ridden a bike in their life can go out and hurl themselves into one of the busiest capitals in the world. That is irresponsible.

âCyclists just go out in shorts and trainers, all gung-ho. I do think there is a critical issue. This is about people dying. We have to take it seriously. This idea of gay abandon, that you can do anything and everybody else should step aside... The problem is that our roads are not designed to have special roads for cyclists.

âThere needs to be a cycling proficiency test. Cyclists should take that test before they are allowed on the roads. Itâs in their interest. We would become more appreciative of the efforts they are making.â

UPDATE 1045am: Green Mayoral candidate Jenny Jones said: âThese remarks demonstrate a shocking disregard for the lives and safety of Londonâs growing number of cyclists and road users in general.
âTo suggest that the victims of road traffic incidents only have themselves to blame is horrifically offensive to the families of those who have lost their lives or been injured on Londonâs roads.
âI will not again use an Addison Lee taxi and am happy to join those calling for a total boycott of their organisation.â

Tory party donor Mr Griffin, who faces Transport for London in court next Monday in his battle to allow minicabs to use bus lanes, said he used to cycle to school in Finchley from his home in Kilburn.

He said: âI have got my Boris bike key. I take it [cycling] very seriously. I have done a lot of cycling in my time. For those of us who have done that, you understand that. Some people think, âLetâs buy a bike, letâs buy a deathtrap. Letâs go out there and be unresponsible.â That is not right. Any reasonable person understands that.â

Last year there were 16 cycling fatalities - a five-year high - and serious and minor cycling accidents have risen nine per cent year-on-year. TfL insists cycling is getting relatively safer because the number of cyclists has also increased.

Mr Griffin, who last night sparked outrage with an article in his company magazine that appeared to blame cyclists for road accidents, said: âItâs not the proper cyclists Iâm aiming at. Itâs the irresponsible cyclists who think itâs a bit of a jape. It just seems that cyclists take the view that they are never to blame. You canât take that view. Whoever is to blame, itâs a lot more painful for cyclists than the guy sitting in the protected car.

âAs a motorist, you lose moments of attention. It can happen. For you, that is a dent in the car. For a cyclist, itâs a broken leg. You have to acknowledge that. Cyclists have to play a full part in protecting themselves. Iâm drawing attention to that.

âI think they should take out their own insurance. We are paying masses of insurance and taxes on fuel. But we find ourselves sharing the road with someone who is untrained, uninsured and inexperienced. A solution needs to be found.â

He said the idea of segregated cycle lanes was an âunachievable dreamâ due to Londonâs street layout that dated back hundreds of years.

âAs a cyclist myself, I have watched people who are not paying attention. They have got headphones on. They arew banging away, tapping the handlebars to the beat of the music. They have got to have all their wits about them. Itâs irresponsbile. I donât want them listening to pop music. I want them to be concentrating on the job in hand. It should be illegal.

âThis isnât a one-way street. This is about all of us sharing minimal space. If they are not going to help that happen, because we have the âholier than thouâ cyclist brigade, they have got that wrong.â 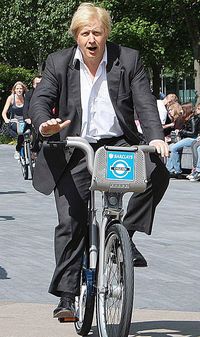 Mr Griffin said he had not donated to Boris Johnsonâs re-election campaign but would be voting for him as he was âsomebody in politics with a sense of humourâ.

He added: âItâs my view that Boris would entirely endorse  what Iâm saying. He is a respobsible cyclist. He is not a gung-ho cyclist.â

Leon Daniels, TfLâs Managing Director of Surface Transport, said: âWe have applied to the High Court for an interim injunction that will require Addison Lee to withdraw the letter it sent to its drivers on 14 April advising them to drive in bus lanes and telling them they were indemnified against any fine or liability incurred. The case will be heard on Monday 23 April.

âWe continue to explore all options to take action against Addison Lee, including assessing the operatorâs fitness to hold a private hire operatorâs license.â

- how exactly will getting insured protect cyclists from accidents?
- will Griffin forbid his drivers to listen to the radio while driving? (that includes the calls from the office telling them where to pick up customers)
- how does Griffith explain that some of last year's dead cyclist were very experienced ones?

hey, forget the cyclists, just think about all the gung ho pedestrians we see on the streets.. they can just buy a pair of shorts and trainers and wander out into the road among all these professional drivers at will. and they pay no tax at all. pedestrians need training and insurance, and helmets, now. they might get hurt, with all these cars on the road. worse, they might bump into someone!

on a serious note, griffin's rant here makes no sense at all. sure, some cyclists don't pay the attention they should. but you can be paying all the attention you like, if an addison lee driver 'loses a moment of attention' behind you, you still end up in the hospital or worse.

'losing moments of attention' isn't inevitable. it happens when under-trained cab drivers are fiddling with their gps, or their phones, or whatever, and not focusing on the road. black cab drivers at least know where they're going.

@Fred, you're right how dare these pedestrians or cyclists use public space without first having the extensive training that Addison Lee's drivers get, which is what - a driving licence? As a pedestrian and cyclist and motorist I dare say I am more qualified than most of these Sat-Nav led auto-pilots.

But what about my gung-ho irresponsible 8 year old boy going to school? He's such a menace trying to get to school on his bike. He should be paying tax and insurance. I'll take it out of his pocket money. How should he compete on these roads with Addison Lee. Presumably the only way for all children to go to school should be to have a driving licence or to book an Add Lee taxi cab.

English cyclists have been using our roads - and paying for them - since before motor vehicles were invented. We pay income tax, VAT, Council Tax and every other flippin tax that pays for the roads - and for the money spent on redesigning them as if motor vehicles were the only form of transport. Most of us also drive cars - and use taxis, but not Addison Lee taxis any more, I'm afraid.

Mr Griffin's comments don't make any sense at all but are unfortunately typical of a certain kind of uninformed motorist. I referred recently in a post on my blog figures from TfL research on the causes of serious accidents between bikes and motor vehicles. It didn't collate the figures for which vehicle caused which accidents - but it appeared to put the blame for between two-thirds and three-quarters of the accidents on motorists. http://invisiblevisibleman.blogspot.co.uk/2012/03/it-may-be-fun-but-is-cycling-part-of.html . As a cyclist, I first noticed the Addison Lee brand only because I was so often horrified by the standard of driving. I can only agree with the people who suggest that it's Addison Lee's drivers who are most in need of extra training, not cyclists.